So, as I said yesterday, today I’m going to talk about another game I’ve been playing recently: Yorkshire Gubbins.

Now, unlike 4 the Words I know the developer of this game, and consider her a friend, so my normal disclaimer about work by my friends applies here. However, I can honestly say that this is a genuinely excellent game.

I’ve been aware of Charlotte’s plans for games set in her Yorkshire Robotics universe since the plan was for a much more graphically intense game called Aye, Robot (a name I still think she needs to use at some point, as it’s too good to give up), but didn’t originally intend to buy the game, because I haven’t bought a computer game for myself in seventeen years and didn’t see any reason to start now. However, I am nothing if not a sheep who meekly follows trends set by his friends, and it turned out that half a dozen different people on my Twitter feed started either raving about what a great game it was or discussing among themselves how to solve particularly intractable problems.

As the game only costs £3.99, I thought that was a small price to pay to be allowed to participate in the conversation, and so as soon as Charlotte released the GNU/Linux build I bought a copy. I was immediately glad I did — Yorkshire Gubbins is one of the funniest, most entertaining, experiences I’ve had in a long time. 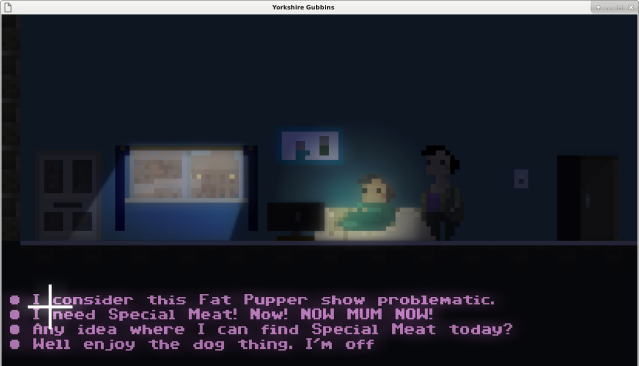 At some point after I stopped paying attention to computer games, in the 1990s, Lucas Arts started making a series of adventure games which remain immensely popular even twenty-plus years later, games like Monkey Island. I never played those games, but they combined the storytelling, narrative, nature of the 80s text adventure with a simple point-and-click graphical interface — you explored an environment, talked to characters by selecting one of a few pre-populated options, and tried to solve puzzles.

Yorkshire Gubbins is very much in the spirit of those games. You wander around a pixel-art version of Calderdale (and it is amazing how well Charlotte has captured the appearance of the area given the deliberately low-resolution graphics, mostly through an incredibly precise sense of colour – I’d never realised how much particular colours can evoke a particular landscape) talking to people, collecting and using objects, in order to solve problems.

The puzzles themselves are all immensely straightforward (although there are a few tricky tasks if you want to unlock every achievement in the game) — so much so that I was able to complete the game as it stands easily. I say “as it stands” because this is an episodic game, and while there are three episodes so far, more are planned (and you get those free on release if you buy the game). However, the fun of the game isn’t so much the problem solving as in the exploration of the hilarious world Charlotte has built up.

There are three episodes so far. The first, Verb School, is available to play online here for free, and gives a flavour of the piece while also teaching those who, like myself, are completely unfamiliar with the medium how to interact with the game. You play a visitor to “Pugh’s Pew-Pew Pupilorium”, a school that teaches you how to play video games, and learn the basic verbs you will be using throughout the more difficult levels. Or at least, it might be Pugh’s Pew-Pew Pupilorium — more likely the robot teacher is just saying whatever you want to hear in order to get your twenty pence tuition fees. 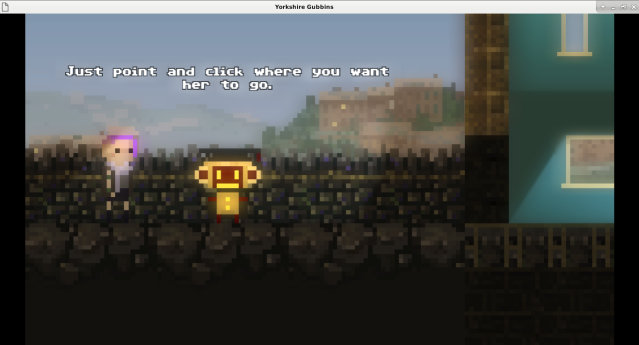 After you’ve succeeded in learning how to walk, pick things up, open and close things, and use things, there are two levels involving actual narrative.

In Holy Mullascony your character, Steggy, is a bridesmaid at the wedding of her friend Bertrella. Unfortunately, Bertrella has been cloned by slug monsters, and so you have to figure out which Bertrella is real and which is the evil slugkin fiend, and allow the real Bertrella to get married. This involves such choice bits of dialogue as:

“But salt is illegal now. Our new Prime Minister banned it.”
“Ah, yes. Our sticky, beer-loving Prime Minister.”
“I do not find this suspicious.”

Holy Mullascony is fairly straightforward, having only a handful of objects, locations, and characters. Humble Pie, the sequel, is much more involved. Here, Bertrella has stolen the special meat you need to make your pie for the pie competition tonight, because she’s annoyed at you wrecking her wedding dress and spoiling her wedding while attempting to find her slug clone (with whom, unlike you, she is now friends). Your attempt to placate Bertrella and regain your meat leads you on an epic quest involving vampires, witches, slug rights activists, reality TV stars from London, a talking bush, dirty pants, and a robot who needs to be convinced he’s normal.

Yorkshire Gubbins is absolutely rooted in its location, both in the voices (all of whom have authentic Northern accents, and it’s an absolute pleasure to find any piece of media where people talk like the people I know — representation matters, in this as in so many other things) and in the humour of the scripting, which is more than a little reminiscent of people like Alan Bennett and Victoria Wood, although the dark, whimsical, absurdism owes a lot to Father Ted or a less mean-spirited League of Gentlemen. And like those things, while you would probably get more out of this if you know the area (and the landscape is very specifically not just Yorkshire, but West Yorkshire) and the local culture, the appeal is still universal. Unless I’ve missed something, even people who’ve never been to the North at all will still be able to understand everything and solve every puzzle.

And yes, I genuinely think this work stands up to those classics. When I was playing it, not only was I in tears of laughter for much of the game, but so was my wife, who couldn’t even see what was going on but could hear lines of dialogue from where she was sitting. This is sharp, funny, clever piece of work, one that’s all the more impressive for being (other than the work of a few voice actors) entirely one person’s work. One of the things I’ve never liked about video games is that they’re the work of immense studios with no clear authorial voice — this is an utterly idiosyncratic work, one that could never have been done by anyone other than Charlotte. It’s the work of a single author, and a great one. I’m looking forward immensely to further adventures in the town of Gubbins.

Yorkshire Gubbins is available from Steam for £3.99. Buy it if you’re safe, clean, and/or normal.

This blog post was brought to you by the generosity of my backers on Patreon. Why not join them?

This entry was posted in Uncategorized. Bookmark the permalink.