There is a great tradition in British TV of tales of the fantastical and macabre. Doctor Who, which I’ve obviously written about on here before, is (at least at times) a prime example, but much of the most interesting TV made during Britain’s TV Golden Age (roughly from 1954 through to the change in the ITV franchising rules from January 1, 1993, which started the race to the bottom between the TV companies that still continues) was based in the fantastic — whether Ghost Stories For Christmas, The Stone Tape, Quatermass, Robin of Sherwood or children’s series like Catweazle or The Box of Delights, a disproportionate amount of the very best TV dealt with the eerie and unexplained.

One of the very best things ever made in that tradition is also the last of them, and was broadcast for the only time twenty-five years ago tonight.

Ghostwatch has a curious place in TV history. People of my age (“xennials” as we are apparently now called) have it as a formative experience, and it’s discussed almost incessantly on forums dedicated to “cult” or vintage TV, to the point where it’s almost second only to The Prisoner in terms of discussion around it. But at the same time, it’s largely unseen outside that relatively small audience — a tabloid scandal meant that it’s never been repeated on British TV, and it wasn’t released on home video until a decade after that single showing. So while I feel like I’m repeating things that everyone has already said just by talking about this programme, I also know that a substantial proportion of my readership has never seen it.

And that’s a shame, because Ghostwatch is a rather special piece of TV. Writer Stephen Volk said he was inspired to write the play by hearing the brother of Terry Waite (who had been held hostage in Beirut for many years) say of his release “I’ll believe it when I see it on the BBC”.

Volk decided to create a play about that idea, and about ideas of trust, and of the viewers’ complicity in what they are watching. The result (after several iterations in different formats) was a ninety-minute production, Ghostwatch, which was put out as part of the “Screen One” strand of dramas.

Ghostwatch was a scripted drama, and the horror story it told was almost a compendium of clichés — two girls, in a difficult family situation and on the brink of puberty, start experiencing strange poltergeist-like phenomena. As this is investigated, it becomes clear that what they’re experiencing is merely the outer “onion skin” of a whole series of horrible events that have happened on that location in the past, including child-murders and the suicide of a deeply troubled man. The investigations make things worse, and at the end the spirit haunting the house is let loose upon the world, with horrifying results.

What made it different, though, was that it was told in the form of a non-fiction programme — a live broadcast, combining in-studio chat with experts and phone calls from the audience with a live feed from inside the haunted house and from the streets around it. What starts out as fun turns horrifying, as the show inadvertently becomes a national séance, with audience members phoning in to say clocks had stopped or glass tables had exploded, and with “Pipes”, the ghost, manifesting in more and more unpleasant ways.

Ghostwatch has been compared to Orson Welles’ War of the Worlds, and there is a definite similarity both in form and in effect (tens of thousands of people phoned the BBC to complain on the night, and it has been linked with various degrees of plausibility to several cases of PTSD among children and to at least one suicide), but (other than some poor performances from the young actors playing the girls) it’s infinitely more convincing, and more terrifying, than the radio show.

Partly this comes from the same kind of techniques that Welles used — there are scripted “technical flaws” with the equipment, the production style is exactly what one would expect from a show of this type, and there are wonderful moments like an outside broadcast scene where Craig Charles is on camera and jokes with some trick-or-treating kids bothering him during the shot, but then the camera doesn’t cut away (one of those technical flaws) when his sequence ends, and he pushes the kid out of the way. Moments like that, where you feel like you’re seeing unscripted actions that go against the presenters’ personas, really sell the illusion.

But the big thing, of course, is the performers chosen. The major cast members in the play all played themselves, and were given roles that perfectly suited them. Sarah Greene, a perky children’s TV presenter, was in the house with the young girls, talking with them about their experiences while keeping them relaxed by bobbing for apples. Greene’s real-life husband Mike Smith was in the studio taking and reading out phone calls from the audience, in a role similar to his task during many live telethons (Smith was one of the UK TV presenters for Live Aid, and performed a similar role for the first few Comic Relief specials). Craig Charles was also on the outside broadcast, joking in a similar manner to his persona from Robot Wars while interviewing people on the street, while the studio anchor was Michael Parkinson, British TV’s most respected chat show host.

With the exception of Charles, none of these people were known for dramatic roles at all, but all were immensely familiar from unchallenging family TV — so much so that even when I saw
Ghostwatch *in the cinema*, a dozen years after broadcast, with the writer present to talk about his script, I *still* found myself thinking of it as a live broadcast, and being *utterly* convinced.

In every case, the presenter/actors’ personas were used to drive the script along. Early in the story, where a traditional horror script has a fake-out scare, there is one — Craig Charles hiding in the kitchen and jumping out at Greene. But this is *exactly* the kind of thing that Charles would be there to do in that kind of production. Parkinson spends most of the first half of the story half-hiding a smirk, and gently mocking the whole concept of the programme as one would expect from him — so when, later on, he seems worried and snappy at one of the studio guests, in a way he would never be on TV, it’s a sign that things are *really wrong*, as is Mike Smith’s increasing distraction as he worries for his wife.

(One thing I oddly found most convincing was just that the number they kept flashing up to call in, 081 811 8181, was the number for all the BBC’s call-in programmes at that time. On the night in question, the number was set up to provide an automated message telling people not to worry, that what they were watching was fiction. Unfortunately, so many people phoned in that the phone lines went down, lending credence in many people’s eyes to the idea that the “national séance” was really having an effect.)

Now, if that were all, then Ghostwatch would still be an interesting play, but what I find most interesting is the way it encourages the viewer to doubt their own perceptions, and their own participation in the “séance”. There are many shots where Pipes, the ghost, is seen briefly as the camera passes, and when the camera passes that way again he’s no longer there. As far as that goes, that’s just standard horror-film stuff (albeit done very impressively on a technical level, as in the shot above where Pipes is seen reflected in the glass door behind Greene, but where Greene herself apparently can’t see him, and the camera follows her in one shot to the spot where Pipes was seen and he’s no longer there).

The best example of this, and one that’s really unnerving, is one shot from very early on: 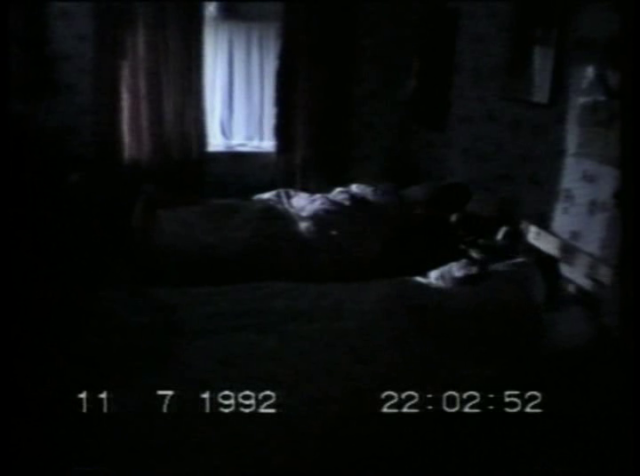 Twenty minutes later, a phone call comes in from an audience member, saying they thought they saw him in the background. The footage is replayed, and we see this:

Are we misremembering the first time? Surely we’d have noticed a spooky bloke standing there. 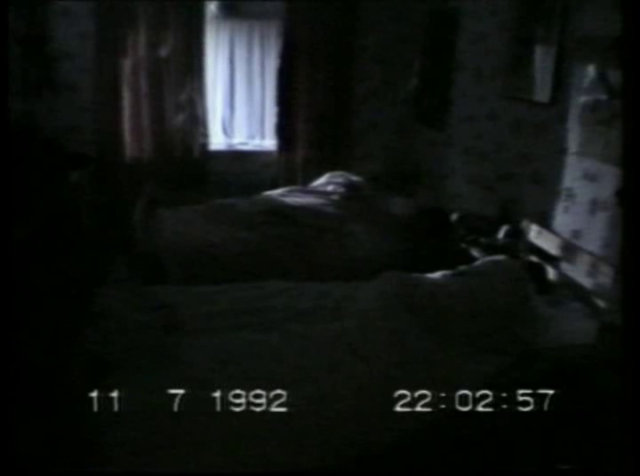 So there’s something there, but not the clear man we saw the second time (and, crucially, not the same nothing we saw earlier). The parapsychologist outlines on the screen where the shadows could be tricking a viewer into thinking there’s a person there, but explains it’s just a shadow.

This kind of thing is enormously effective, and is what makes Ghostwatch particularly relevant today. If Ghostwatch had been just about convincing people not to trust the BBC, well… we already have the tabloids for that, and while a certain amount of distrust in the media might have been a healthy thing to want to create in 1992, in a climate like today’s where any fact one disagrees with can be greeted as the work of “the biased BBC”, “the MSM”, and “fake news”, such pseudoscepticism can seem more like an autoimmune disease of the body politic.

But distrusting oneself? Taking time to decide whether the evidence of one’s own eyes is reliable, and to re-examine our own preconceptions and perceptions? That’s something we can do with a lot more of, and something that is more valuable now than ever before. And it’s something that, almost incidentally, in the process of being one of the most terrifying pieces of horror TV ever, Ghostwatch manages.

I don’t know if it would have the same effect on anyone who wasn’t in the UK and in their early teens in the early nineties — so much of its effect depends on it being so close to programming that was on at that time — but even people like my wife (who is USian and so didn’t see it until more than a decade later, and never saw any of the programmes it takes its stylistic cues from) find it a remarkable piece of work.

It’s available on DVD, but for 30p more than getting it on its own, you can get it in a double-disc set with The Stone Tape, another British TV horror classic, and one of Ghostwatch‘s inspirations. Get it, and remember a time when something this shockingly good could be produced by a TV company.

This blog post was brought to you by the generosity of my backers on Patreon. Why not join them?

2 Responses to Ghostwatch: 25 Years On