The Good Place is, for a US network TV series, a remarkably daring piece of work, but to explain why will require HONKING GREAT SPOILERS. I’M NOT KIDDING, YOU KNOW I DON’T NORMALLY CARE ABOUT SPOILERS BUT THIS TIME I DO

I’m actually going to put a big picture in so those of us who read fast won’t read the rest by accident. 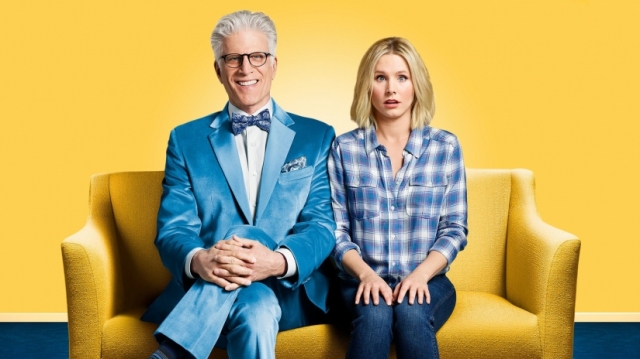 Still here? Good. For those who don’t know, The Good Place is a US half-hour network sitcom that first aired last year, starring Kristen Bell and Ted Danson. Its second season started a couple of weeks ago, and Netflix got the streaming rights for the UK, putting the whole first series online at the same time as the first episode of season two, which is currently being added every Friday.

The first episode sets up a premise that has near-infinite potential. Eleanor Shelstrop is a bad person who has died and been sent to what is always referred to as “the Good Place” by mistake. The angel in charge of her case, Michael, has mistaken her for someone else of the same name, and now she’s in a small village of three hundred people — one of many such villages, full of monks, humanitarians, people who gave their lives to save others, and just generally the most morally good people there are.

Her being there and behaving like herself causes things to go wrong, though — she’s like grit in the clockwork, and when flying shrimp and giraffes start causing havoc, she realises that she can’t continue to stay in the Good Place as she is. But if she’s found out, she’ll go to the Bad Place, which would mean being tortured for eternity.

She confides in Chidi Anagonye, a professor of ethics, who agrees to teach her how to be a good person, but of course she keeps making mistakes.

And this, in itself, is the premise of a series that could run for years — you’ve got an indefnite story engine in Eleanor trying to keep her true identity from Michael, and along with that you’ve got the “professor in the afterlife trying to teach a bad person to be good” plot and comedy hook that worked so well for the first few series of Old Harry’s Game. The comedy isn’t the funniest thing ever, but there’s at least a couple of genuine laughs per episode, and as Rick & Morty has also been showing, the half-hour sitcom format is a good container for imaginative SFF, which this definitely is.

The cast is great (and diverse — the protagonist is bi, and the other three main human characters are a British-Pakistani woman, a black man from Senegal, and a Filipino man. Other than Danson there are almost no white men in anything other than bit parts or guest roles) and the series could easily continue with Eleanor learning her lessons for ten seasons or so.

Apart from one thing that bothered me as I watched the first few episodes. You see, the characters here are all meant to be moral exemplars — Tahani Al-Jamil, for example, raised sixty billion dollars for charity — but they know for sure that Hell really exists, that there is an infinite amount of suffering there, and that the vast majority of humanity go there. Any *remotely* decent human being would, on arrival in the Good Place, immediately decide to devote the whole of their infinite existence to the destruction of any system that allowed such inconceivable horrors, not sit around eating frozen yoghurt and hosting extravagant parties, as the people of the Good Place do.

Now, this would be OK as just a game-rule of the show — fair enough, the rules of the programme say there has to be a hell, but don’t poke too closely at the characters’ reactions. At some point *all* TV programmes have a point where you have to do this, and that’s just something you have to accept, unless you want to end up saying “but that’s not even the real Latin name for a road runner! You know, I think this cartoon may be lying to us!”

But the series seems to just sort of… keep *poking* at it. Chidi’s ethics lectures to Eleanor actually deal with some real, serious, issues of moral philosophy and ethics, and give at least a broadly correct overview of the major positions held by different philosophers. Not an in-depth one — this is, after all, a half-hour sitcom with fart jokes and will-they-won’t-they romances to get in — but it clearly takes the issue of ethics and morality seriously enough that it expects the viewer to as well. And yet this aspect was never brought up.

After about four episodes I started seeing this as a major flaw in the series, and trying to figure out ways they could improve it, because as it was one had to either see the sympathetic characters as monstrous or ignore the ethics that the show clearly thinks is important. And I figured out one way round the problem, but thought “they can’t possibly do that, because that would completely break the story engine they’ve got, and no TV writer is so profligate with ideas that they’ll smash a story engine”.

So in the first season finale they did exactly that. They did what I thought would be too daring for them to do, and stated that the Good Place we’d seen all season is really the Bad Place, that almost all the human characters are really demons there to torture our human principals, and that there was no-one good in the whole programme. Then they wiped the characters’ minds and started the whole thing over.

So the second series, currently airing, has what amounts to a totally different premise — can our major characters realise they’re really in Hell without alerting the demons that they know, can they keep their memories, and can they somehow escape from the Bad Place and make it to the real Good Place. What was a slightly-more-imaginative-than-average sitcom has now become The Prisoner meets Old Harry’s Game (and Danson’s performance as Michael, which I thought was far better than I expected from him when I thought he was playing an angel, having only previously seen him in Cheers where I wasn’t impressed by him, is astonishing once you realise he’s playing a demon playing an angel. One of the best TV acting jobs I’ve seen in recent years).

This is now a series that has already pulled the rug from under its viewers once in a major way, and has burned through a good premise for an ongoing series and turned it into a magnificent premise for a definitely-finite series. It’s rare that you can say of a series that you don’t know what kind of thing it’s going to do next, but here I truly don’t know, a third of the way through season two, what on Earth the show will even be by the end of the season.

I can’t recommend this enough, with one caveat — which is that there are three occasions in the series so far where bad things happen to dogs. It’s all cartoony and completely unrealistic, but I do know some people who will want a warning anyway (though there’s nothing that will traumatise anyone if they’re prepared, and it shouldn’t put you off watching).

15 Responses to The Good Place