Why Gorton is Winnable

I wrote a few weeks ago, after Jackie Pearcey was selected for the Lib Dems in Manchester Gorton, that I think she stands a decent chance of winning the seat. Certainly the bookmakers seem to agree now — the odds of a Lib Dem win are now only four to one (they started at twenty to one) with Ladbrokes. Personally, I think that’s about right — I think a Labour victory is more likely than a Lib Dem one, but I think a Lib Dem victory is definitely not unlikely.

However, when I was at conference I noticed that some Lib Dems from outside the area seemed unsure about this, mostly because of the poor result in 2015. Several Manchester Lib Dems ended up giving essentially the same spiel to unconvinced members who don’t know the local area the way we do. This blog post is, essentially, what we were saying (I talked about this a lot with Richard Gadsden, particularly, and some of this owes something to him). It’s aimed primarily at Lib Dems from outside the area who are thinking of coming here to help or giving money, but don’t know if it would be a waste.

To give you an idea of my own local credentials, there are seven wards in Manchester Gorton — Fallowfield, Gorton North, Gorton South, Levenshulme, Longsight, Rusholme and Whalley Range. I have lived in Rusholme, Levenshulme, and Longsight and currently live in Gorton South (right on the border with Levenshulme ward — I’m in Levenshulme geographically, just not on ward boundaries), I went to school in Whalley Range, and I’ve stood for election in Gorton North and Gorton South. I have knocked on literally thousands of doors in this constituency. So I think I have a reasonable feel for the place.

Now, yes, we did do badly in 2015 (and in the council elections in the coalition years). But look at this: 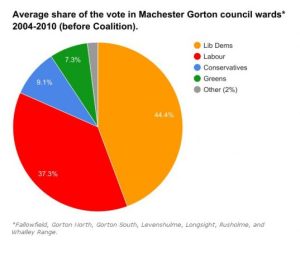 That chart is from political betting, and shows the average vote in local elections in the wards in the constituency between 2004 and 2010. Not a cherry-picked best ward or anything like that — this isn’t any “two-horse race” nonsense, just an accurate representation of the constituency pre-coalition. *All* the wards. At our high point, only a few years back, we had nineteen of the twenty-one council seats for the constituency, and we had councillors in all seven wards.

Now, obviously, that was pre-coalition, but surely a winnable seat should have done better in 2015?

Here’s the thing — we didn’t campaign here in 2015 at all. Up to 2005, Gorton would have been the closest thing to a target seat for the party in Manchester, with Withington a close second, but in 2005 John Leech ran such a fantastic campaign that he managed to win, surprising everyone. In 2010 we stayed where we were in Gorton, but put extra effort into keeping Withington rather than pushing Gorton over the edge, as Labour threw *everything* at it (Eddie Izzard was going canvassing at one point).

In 2015, though, following the coalition, we had to put *all* our resources into Withington. I don’t think a single leaflet was delivered, door knocked on, or phone call made in Gorton (and I would know if they had been — I stood in Gorton South for the council that year, and a very good friend of mine was the Parliamentary candidate). Between the desire of the electorate to give us a thumping for the coalition, the utter lack of a campaign, and Gerald Kaufman’s personal popularity, our vote just stayed home.

But there is a *large* base of people in the constituency who have voted for us in the past and could be persuaded to again. And given that the public seem largely to have forgiven us for the coalition, that Labour is at its lowest popularity levels *ever*, and that Gorton voted 62% Remain, I am absolutely certain that we will do very well indeed. We *may* not win, but we’ll come a very close second if we don’t.

You see, Manchester Gorton is a very odd constituency, and one which is a lot more complicated than you might think. Manchester itself is almost two separate cities — North Manchester, particularly the north-east of the city, is “white working class” to use the phrase that has gained so much popularity. Places like Blackley and Harpurhey are the kind of areas that get poverty-tourist handwringing articles by John Harris in the Guardian, and those areas have huge levels of racism — they were the BNP’s heartlands, and are now UKIPpy areas.

The south of the city, on the other hand, is as poor as the north, but it’s an integrated poverty, with people of every race and religion living in the same areas as each other.

And Manchester Gorton straddles that divide almost precisely. The two actual Gorton wards are, culturally and demographically, North Manchester — the TV series Shameless was filmed in Gorton, for example. The other five wards, though, are defiantly South Manchester — a large Asian population, a smaller but still very large African and Caribbean population (the BAME population of the constituency is 46%, with 29% of that being Asian — taking out the two largely-white Gorton wards, I would guess the other five are probably majority-BAME, though I’ve not seen a ward-by-ward breakdown), a ton of students and academics (Fallowfield and Rusholme have all the city’s student housing), a few hipstery gentrifying areas, and a big chunk of Irish diaspora. On my two-minute walk to the nearest bus stop in Levenshulme I walk past two kebab shops, a C of E church that backs almost directly on to a mosque, a Polski Sklep, an off-license run by a West Indian bloke, and an Irish-owned sports bar.

So where North Manchester places tend to be very insular, the South Manchester bulk of the constituency is the kind of place whose inhabitants see diversity as a positive good — the kind of place that’s fiercely anti-Brexit. I see *tons* of pro-immigration, pro-refugee graffiti, and when I’ve attended public political meetings in the area they’ve all been dominated by internationalists. And that’s being reflected in the campaigning and canvassing — Jen Williams, the Manchester Evening News’ rather brilliant political reporter, has been tweeting quite a bit about being told by Labour activists that Brexit has been coming up a *lot* on the doorstep — according to her, Labour canvassers have been saying there are “too many undecideds”, especially in the more middle-class parts of the constituency.

Now, demographically, the two Gorton areas would normally be so staunchly Labour that they would be enough to hold the seat given any normal swing — they’re the kind of wards where one would expect UKIP to be the main challengers. But there are two reasons why that may well not be the case — and why Williams is reporting that “In white working class areas people [are] ‘not voting or not answering the door'”

The first is that our own candidate, Jackie Pearcey, is very popular in those areas. Despite being properly liberal (she *never* gives mealy-mouthed answers on immigration, for example, when asked about it by voters) she has the respect of a *huge* number of voters in Gorton, where she was a councillor for twenty-one years — she’s a proper Local Champion type of candidate who they know will do the work for her constituents.

(Which is not to say that, if elected, she’d be a super-councillor type of MP. She’d work hard, but she’s got a good brain for policy stuff too, especially on science and technology issues.)

The second is that George Galloway has done us the massive favour of standing. Galloway has no chance of winning in this constituency, but he’s taking votes away from Labour at both ends. Labour’s candidate, Afzal Khan, is an Andy Burnham style weathervane machine politician, happy now to talk about what a good leader Corbyn is and how much he agrees with him, but equally happy previously to talk about how wonderful Tony Blair was when *he* was leader. He’s an MEP doing a chicken run into a notionally safe seat before he loses his seat in the European Parliament. (He won the selection after a bitter, divisive, internal row in the local Labour party).

Galloway will take votes from him on the left (if you search for Galloway’s name on Twitter you’ll see a million tweets all calling him the “Real Labour candidate” and talking about how Corbyn would prefer him to win rather than Khan). He’s also, though, likely to take votes from the authoritarian right traditional Labour supporters. Galloway’s running a campaign that’s far to the right of what you’d expect from him under other circumstances — the curry house which has a big poster of him up outside it, which has shown up quite a bit on social media, is round the corner from my house. Until last week, it had a similarly-sized poster saying “Vote Mohammed Afzal: Conservative Party”.

Galloway has been taking funding from the loathsome Arron Banks, and using Banks’ Westmonster site to promote his candidacy. He’s proudly pro-Brexit, and claims he is standing because Labour selected an all-Asian shortlist and this is unfair.

In other words, Galloway is trying simultaneously to appeal to the right-on left-wing Stop The War Coalition people *and* to racists. Both these groups have traditionally voted Labour in Manchester Gorton, and while he won’t appeal *at all* to moderate centre-left Labour voters, and has less chance of winning than I do of becoming Pope, he will split the Labour vote enough to make the race very, very competitive.

Without Gerald Kaufman’s immense personal popularity, Gorton *will* fall to the Lib Dems sooner rather than later — I am absolutely certain the constituency will be ours within a decade. The only question is whether it will fall to us this year, or in 2020 or 2025. That’s really down to the efforts we put in over the next month.

I’m not going to say we definitely will win this time — like I said at the start, those four to one odds sound about right to me. But four to one odds make it worth the fight, and I know that I am fighting to win.

[Just so Patreon backers know, I won’t be charging backers for posts about this campaign, as I don’t think it would be right to have people who support other parties or live in other areas subsidise my writings about a campaign they may not agree with.]

This entry was posted in Uncategorized and tagged gorton by-election, lib demmery, politics. Bookmark the permalink.

2 Responses to Why Gorton is Winnable