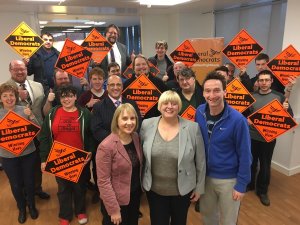 As some of my readers are aware, I live in the Manchester Gorton constituency. After the sad death of its MP, Sir Gerald Kaufman, last week, there will be a by-election. And I think it’s possible – not a certainty, by any means, but possible – that the Liberal Democrats will win.

Please note, before I continue with this, that nothing in this post is based on any inside knowledge about how the campaign will go. My total involvement with the local party this year has been turning up to the selection meeting yesterday and grabbing a couple of rounds of leaflets to deliver this morning. The party has some people involved who are better at strategy than I will ever be, and I’ve not spoken to them about the plans.

But I still think there’s a very good chance of winning.

Now, on the face of it, that seems absurd. Manchester Gorton is, under normal circumstances, one of the safest Labour seats in the country. The last time anyone other than the Labour candidate won an election in this seat, my great-grandmother was ten years old. Sir Gerald had represented the seat since I was four. And the Lib Dems did very poorly here in the last general election.

But then, we did very poorly everywhere in the last general election, but we’ve been doing surprisingly well in by-elections ever since the Brexit referendum. We won in Richmond Park, came a very close second in Witney, and doubled our vote in Copeland and Stoke Central – two seats where, unlike in Manchester Gorton, we were not the principal challengers, and not seats that played to the party’s strength. And in council by-elections, people on Twitter have started saying things like “another Thursday, another Lib Dem gain on a massive swing”.

Gorton will be a very, very interesting by-election in this respect, because the Lib Dem vote gain is pretty much all coming from the Remain vote, as we’re the only major party that’s not campaigning for Brexit (and not only that, but for the particularly suicidal approach to Brexit being supported by Labour, the Tories, and UKIP – there are ways in which Britain could leave the EU and not completely destroy its economy, international relationships, and quality of life, but none of those three parties seem the slightest bit interested in doing those).

This also, incidentally, explains why the Lib Dems’ vote-share gain has not yet been reflected in the national polls. A much higher percentage of people are telling pollsters that they voted Remain than the 48% who actually did, so pollsters are downweighting their Remain samples to account for that. It seems likely that this is false recall (a similar thing happened after the 1992 election, when a lot of people “remembered” voting Labour but voted Tory), but either way, the increase that the polls are showing is much less than the increase that’s being seen in real elections.

So far, since the referendum, we’ve had Parliamentary by-elections in Tory Remain-leaning areas and Labour Leave-leaning areas. What those by-elections have shown is that the Lib Dems can beat the Tories in Tory Remain areas about 50% of the time, and the Tories can beat Labour in Labour Leave areas about 50% of the time. What we haven’t yet seen is whether the Lib Dems can beat Labour in Labour Remain areas. I think we can. And Gorton is a very strongly Remain area – almost two thirds of people here voted to stay in the EU.

Up to 2010, we came a very strong second in Gorton, and we would have done significantly better in 2015 than we did had we campaigned here – it’s common knowledge that all the Lib Dems’ effort in 2015 went into keeping, rather than gaining, seats, and I don’t think I delivered a single leaflet in Gorton during that campaign. We’re going to be campaigning in this by-election, though.

Even so, that would normally give us only the expectation of getting back to a decent second place – which would in itself be a fantastic result, don’t get me wrong – but wouldn’t let us win. But I think there are a few other factors that come into play.

The first is that the Labour vote here is very weak. There’s never much turnout in the constituency, and a lot of it was Sir Gerald’s personal vote. For all that I disagreed with him a great deal on policy, he was an excellent constituency MP, and was very well liked among the different communities in the constituency. But until 2010, the Lib Dems had a lot of councillors here, as people were voting for their good local representative, not party loyalty.

I’ve no idea who Labour will choose for their candidate, but I’ve seen a lot of names suggested as having put their names forward, and the local feeling about those people runs a gamut from “who?” to “Oh God anyone but them!”

And Labour in Gorton are incredibly fractured. They held the constituency almost solely on Sir Gerald’s reputation, but the constituency party has been in special measures due to infighting for thirteen years, according to news reports I’ve read. “Special measures”, incidentally, means that the national party has told them that they can’t make any decisions for themselves because they’re not grown up enough. For much of last year the local party wasn’t even allowed to meet – as the Evening News (a *pro-Labour* paper) puts it “As with all things to do with Gorton CLP it can be difficult to get to the actual facts – but suffice to say the police were called in amid claims of vote-rigging, abuse and intimidation” – and so from July through November there wasn’t a local party at all, as it was suspended.

Now, the demographics of the constituency are very odd, and under normal circumstances a “normal Labour candidate” would still beat a “normal Lib Dem candidate”, because while the Lib Dems might do well in studenty parts of the constituency like Fallowfield and Rusholme, or gentrifying areas like Levenshulme, we’d be expected to do less well in areas like Gorton itself, which is the kind of post-industrial, poverty-stricken, area where Labour always do well. (So well, in fact, that they take great care to ensure that those areas never *stop* being poverty-stricken).

Jackie Pearcey, the candidate, was a councillor in Gorton for twenty-one years, and managed to hold on to that seat for that long, despite the demographics being utterly against Lib Dems, by being one of the hardest-working councillors in the city, and quite possibly in the entire country.

I spent much of 2011 and 2012 campaigning with Jackie – I knocked on several thousand doors with her in that time – and know the immense regard in which she is held by the residents of Gorton. Her personal vote held up remarkably even in 2012, and she got the highest Lib Dem vote share in Manchester when the Lib Dems were doing their worst. She was a councillor in Gorton for so long, and did the job so well, that even five years after she stopped being a councillor she’s still regularly stopped in the street by people who want her to help them with a council-related problem, because for so long everyone in Gorton just knew “if you’ve got a problem, you ask Jackie and it’ll get fixed”.

So in the area of the constituency where we would normally be weakest, we have a candidate who is universally admired. The people of Gorton know who their local champions are, and will vote for Jackie in a heartbeat over some Labour nobody parachuted in by the central party because the local party can’t be trusted to make their own decisions.

I think Jackie would make a damn good MP, and is the sort of person we need in Parliament even if she wasn’t in my party – she’s got a doctorate in physics and now works in computing, and given the lack of understanding of scientific and technical issues in Parliament, and the importance of those issues, we need people like her. But more important even than that, she’s someone who cares about poverty, as everyone in Gorton knows. Manchester Labour have recently announced that between council tax rises and cuts to council tax support, the very poorest people in the city (a group that includes a lot of the residents of Gorton) will have a 22% raise in their council tax payments. Or at least, the poorest people with homes will. Manchester Labour’s attitude to homeless people is much worse even than that.

So we have a candidate who genuinely stands a very strong chance, because the people who would normally be Labour’s core vote will vote for her, when they wouldn’t vote for any other non-Labour candidates.