When I went to see this show, two weeks ago, I planned to write a review that night. It’s taken two weeks, because I ended up a little more involved in the show than I expected…

Lightning Strikes was a show I’d been looking forward to for months, since first seeing a flier for it back in November. Part of the Queer Contact season of LGBT-themed performances at the Contact Theatre, it was, in part, a celebration of the music of Klaus Nomi.

Nomi, who died in 1983, was an absolutely unique performer, who came out of the New York arts scene in the late 70s/early 80s. He sang with a voice that went from a mannered, Kraftwerk-esque sprechstimme into a gorgeous operatic falsetto reminiscent of Maria Callas, performed as a Bowie-esque glam robotic alien figure, and sang a mixture of Dowland and Purcell pieces, 60s pop tracks like Lightning Strikes and The Twist, and clever post-apocalyptic glam-pop originals like this:

That song was written by Kristian Hoffman, who wrote most of Nomi’s best originals, and who was, as Nomi’s early musical director, probably as responsible for Nomi’s success as Nomi himself. What Nomi brought to the partnership was an astonishing stage presence, an overall concept (a rather nebulous, or at least never fully-articulated, idea to do with post-apocalyptic aliens), a knowledge of parts of the operatic repertoire that were then little-performed, and, especially, that *VOICE*. What Hoffman brought, as he says in the documentary The Nomi Song, was a pop sensibility, a knowing wit, and a sense of camp, along with a wonderful songwriting talent.

It was Hoffman who, for example, wrote Simple Man, a song that (at least in Hoffman’s original conception, which didn’t quite make it to the record) ends with Nomi quoting the Cramps before fading out on the guitar solo from Goodbye To Love by the Carpenters. Hoffman also suggested the 60s pop covers that made up such a substantial part of Nomi’s repertoire.

Over the decades since their association ended, Hoffman has continued making wonderful music, working with a variety of wonderful musicians including Carolyn Edwards, Dave Davies and Rufus Wainwright, and releasing several albums of his own — his 2002 album of duets, &, is probably the best album of the last twenty years, a stunning meditation on religion, sexuality, and mortality. (Hoffman himself prefers his 2010 album Fop, which I’d put ‘only’ in the top five or so albums of the last five years).

For this performance, Hoffman was mostly the accompanist for Joey Arias, whose work I was much less familiar with before the show was announced, though a few visits to YouTube and a purchase of the one EP of his available on Amazon convinced me that he too is a great talent.

Arias was a backing vocalist and dancer with Nomi, and appeared with him on his most famous performance, singing with David Bowie on Saturday Night Live. These days, though, Arias performs in drag, singing torch songs and jazz, and is an exceptional singer.

The first part of the show went about as I expected — they opened with a song that Arias had written for a Cirque du Soleil show he was in for several years, then went into The Nomi Song, a song Hoffman had written for Nomi. The Hoffman/Nomi songs are clearly somewhat outside Arias’ comfort zone as a singer — they require an incredible vocal range, and also a precision of phrasing very different from the loose jazz style Arias favours — but he managed admirably, though saying at the end “no wonder Klaus died!”

The next song was You’ve Changed, and here we really got to see how good Arias is. Arias is known for his performances of Billie Holiday songs, where he manages to perfectly capture her vocal style — and I do mean *perfectly*. Unfortunately there are no YouTube videos from the show I was at, but this, with Arias performing with a full band, should give some idea how good he is:

This was, if anything, even more stunning with just a piano for accompaniment. The next few songs followed the same pattern — performances of songs Hoffman wrote for Nomi, a version of Lightning Strikes radically reworked for Arias’ range, another Billie Holiday song, and another of Arias’ songs for Cirque du Soleil.

There was a shambolicness to the performance at times — this was the opening night of the tour, and Hoffman had only arrived in Manchester a few hours earlier after an eighteen-hour flight from LA, so at times they had to stop and restart bits when one or other of them missed cues, but this just added to the enjoyment, giving a sense of spontaneity and allowing for moments of comedy where each man would blame the other for mistakes.

And then some idiot from the audience got up and started singing with them. 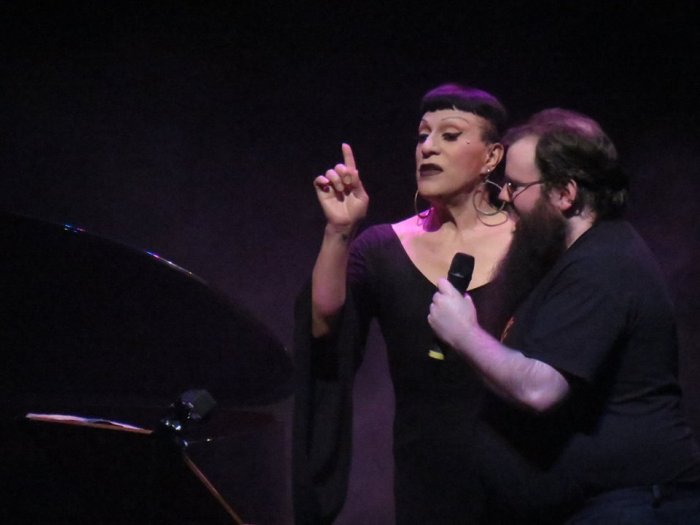 It was my own fault. Arias is a cabaret style performer, which means a *lot* of audience interaction, and I did know this but still decided to sit in the front row.

After Arias’ song Sex Is Beautiful, he tried to arrange some “Queer Contact” by setting up a woman in the front row with another woman, despite her being straight. After this, he asked “are there any straight men in the audience?”

Like an idiot, I said “yeah”, expecting there to be a few mumbles from the crowd — but I was the only one who said anything. Arias immediately started acting coquettishly towards me — “the only straight man here, and the only one who knows the songs” (he’d obviously seen my lips moving — I have a tendency to mouth along with songs at gigs). There was a couple of minutes of back and forth, where he discovered my name (“Really? Hickey? I had one of those just yesterday” to which Hoffman replied “I bet he’s never heard that one before.”), that I was a Nomi fan, that my accent is easily mockable for an American, and that Hoffman knew me from Facebook.

I thought that would be it, a little bit of banter, tease the straight man, on with the next bit. And Arias dedicated Simple Man to me, and they did a wonderful version of it. But then, after the song, Arias beckoned me to the front of the stage. I thought he was going to try to embarrass me with some sort of flirtation, which would have been fine (I don’t embarrass easily, and if I couldn’t take a joke I wouldn’t look as ridiculous as I do) but then he told me to get on stage — and had me sing three choruses of Simple Man, solo, to Hoffman’s piano accompaniment, before getting hugged by Hoffman.

Now, for those who’ve had the good fortune not to hear my voice before, I’m a bass, and I have an unpleasant nasal voice (think, roughly, Ringo Starr impersonating Mike Love of the Beach Boys, and you’d have some idea). I am not a natural singer, is the point.

And this is what I had to sing:

The rest of the set — including a cover of White Room by Cream, and a lovely version of God Bless The Child — passed in a bit of a blur for me, but was every bit as marvelous as the earlier part had been.

And then, on the last song, After The Fall, Arias called me up on stage again. This time I was sharing a mic with Arias, who has a much more powerful voice than me, and so I literally couldn’t hear myself and kept to bassy rumblings, and I took the final bow between the two of them.

It wasn’t *quite* the final bow, of course — there was an encore with a stunning version of Life On Mars, done as a duet between the two of them (as was After The Fall — most of the other songs had Arias as sole vocalist).

After the show both Arias and Hoffman spent time chatting to people, and I got to have a long talk with Hoffman, who was far more interesting and friendly than he had any right to be despite him clearly being practically dead from exhaustion (I was my normal tedious self), and a briefer one with Arias, who was regaling a small crowd with tales of working with Bowie and hanging out with Warhol.

Even if I hadn’t been part of the show, I’m fairly sure this would have been the best gig of the year, only six weeks into it. I can’t recommend seeing either Arias or Hoffman, together or separately, highly enough.

Just don’t admit to being straight unless you can hit the high notes.

Setlist
(This is from memory, I may be getting the order wrong)
I Love Your Eyes
Nomi Song
You’ve Changed
Lightning Strikes
Total Eclipse
Easy Living
Sex Is Wonderful
Simple Man
White Room
God Bless The Child
After The Fall
(encore) Life On Mars