On Sentient Universes, The Problem Of Evil, Grant Morrison, Doctor Who and other such stuff

Blame Philip Sandifer for this. I meant to write another short story today (I still might).

I thought I’d said everything I had to say about Grant Morrison, and more, between my book on Seven Soldiers and Sci-Ence! Justice Leak!. But then Sandifer (who, if you don’t know, is the writer of the alternately wonderful and infuriating TARDIS Eruditorum blog goes and says something as an aside which starts me pacing around the house like a maniac and saying “Is this just a blog post or is it another sodding book?”

It’s just a blog post, but not because I don’t have enough to say on this subject, but because I can’t justify writing a *third* book that’s mostly about Morrison’s ideas.

Now let’s have a look at the latest post on TARDIS Eruditorum – the one about Lance Parkin‘s book Cold Fusion. In this post, Sandifer says (talking about his own ideas about Doctor Who):

The root idea is, for once, borrowed from Grant Morrison instead of Alan Moore. Morrison has several times suggested that the DC Universe line of superheroes is sentient and has an animating consciousness. My disagreement with Morrison is not on this point, but rather on the implications of it – Morrison seems rather to like this fact, whereas I think that the DC Universe is, while sentient, a dangerous sociopath (albeit one capable of moments of staggering beauty). But the underlying idea, obviously, appeals.

I think Sandifer may be reading Morrison a little too simplistically here (odd, because his reading of Final Crisis as narrative collapse is absolutely correct). And it will surprise no-one who’s read… well, anything I’ve ever written… that I’m going to use Seven Soldiers as a counter-example.

Before I start talking about this though, I just want to say that the idea of a fictional universe being sentient is, while far-fetched, not one that should be entirely dismissed out of hand. Certainly, if one is to make the assumption that neural networks embody intelligence (an assumption made by many, with little or no reason that I can see — the argument appears to be ‘the neurons are the bit of the brain where we can tell some of what they’re doing, so therefore they must be the important bit, not all those glial cells and such’. I exaggerate slightly.) then the collaboration network of Marvel Universe characters has some very interesting features. This is not to say I agree with Morrison or Sandifer — I don’t — but that their contentions are not utterly dismissible, and are at least an interesting way to look at things. The DC Universe, and Doctor Who, are not sentient themselves, but treating them as sentient entities can provide interesting readings.

So — *does* Morrison seem to think that the sentient DC Universe is an ultimately benevolent one?

Certainly, that would be the implication of Morrison’s early work. In The Coyote Gospel we get this:

Borrowing some of the structure from Michael Maltese’s script for Duck Amuck (and incidentally, does anyone else get as annoyed at the attribution of authorship of classic cartoons to their director as I do? Chuck Jones was great, but Maltese scripted and storyboarded those great cartoons), Morrison (and Truog, Hazlewood, etc, but here and from here on I’m talking specifically about the writing) creates a strictly hierarchical set of fictional universes. The Looney Tunes/Merrie Melodies universe is lower than the DC Universe is lower than ours, and in each of these, there is a creator who delights in causing pain to the more innocent people in the universe below.

However, this hierarchy of universes has never really fit with Morrison’s thinking, and so later we get to a view more like the one Paul Magrs and Jeremy Hoad use in The Blue Angel (which I’ve quoted earlier):

‘Oh?’ asked the dog, sounding rather withering. ‘Listen, Fitz. Learn to think of all these things as stories. And stories can’t contradict each other because, in the end, they’re all made up. Nothing can take precedence then. All right?’
‘I’m not sure I know what you’re on about.’
‘Well, you reckon the world you live in takes precedence over the world you’re reading about. So you’ve established a hierarchy, yeah?’
‘Of course! I’d be out of my tree not to!’
The dog was looking sceptical again. He gave a kind of shrug and started nibbling the herbs once more. ‘Maybe. But think how happy you might be if you didn’t have to make those choices about what you should invest belief in. Here in the Obverse you can think of it all as a kind of fugue.’
‘Fugue?’
‘Hmm,’ said the dog, chewing. ‘No contradictions anymore. Every story holding equal sway. It means there are always alternatives. And it means no natural ending.’
Fitz took his last drag on his cigarette and ground it out on the window sill.
‘I don’t believe it.’
‘No?’ asked the dog.
‘No. One reality has to be more valid than the other. It has to be realer.’
The little dog laughed and said, ‘Well… what if you found out that the one you’re in was the less real one? What if you found out that you yourself are less than real?’
Fitz laughed and looked at the moon.
‘You’re one hell of a dog. Do you know that?’
‘Oh, yes,’ said Canine primly.

(Incidentally, this view of Doctor Who, as a set of mutually-contradictory, equally-valid stories rather than a single continuous narrative, was one that was only possible when Doctor Who stopped being ‘a TV show’ made by a single creative team at a time and became instead a set of TV shows, books, comics, audio dramas and so on created by different people with different agendas, one which was almost impossible for a single human being to experience in full, just like DC Comics’ universe with its multiple publication per month for 70 years. It may be significant in this light that Ian Levine, the man who in Doctor Who fandom most represents the antithesis of this view, and who holds that ‘if it wasn’t on TV it didn’t happen’, is also the only person in the world to own a copy of *every* DC Universe comic. His admirable work in tracking down so many lost episodes of Doctor Who probably comes from the same basic instinct – of wanting a closed, complete story rather than an open-ended one.)

In fact, Morrison’s later take on the relative positions of the various universes seems closer to Lawrence Miles’ use of bottle universes in his Doctor Who fiction. In Miles’ New Adventure Christmas On A Rational Planet the Seventh Doctor sees the Eighth Doctor living in a bottled universe, but in his BBC Book Interference he has the Eighth Doctor looking into a bottle universe containing the New Adventures version of the Seventh Doctor. (And in Dead Romance a universe very like our own is revealed to be inside another bottle).

Anyone who’s read anything I’ve ever written knows I’m going to get into Seven Soldiers now – or at least the prequel to it in JLA: Classified

In various of Morrison’s stories, he has our universe personified as the infant universe of Qwewq. And in All-Star Superman #10, possibly the finest single comic issue Morrison has ever written, he has this happen (the giant black cube is Qwewq – our universe): 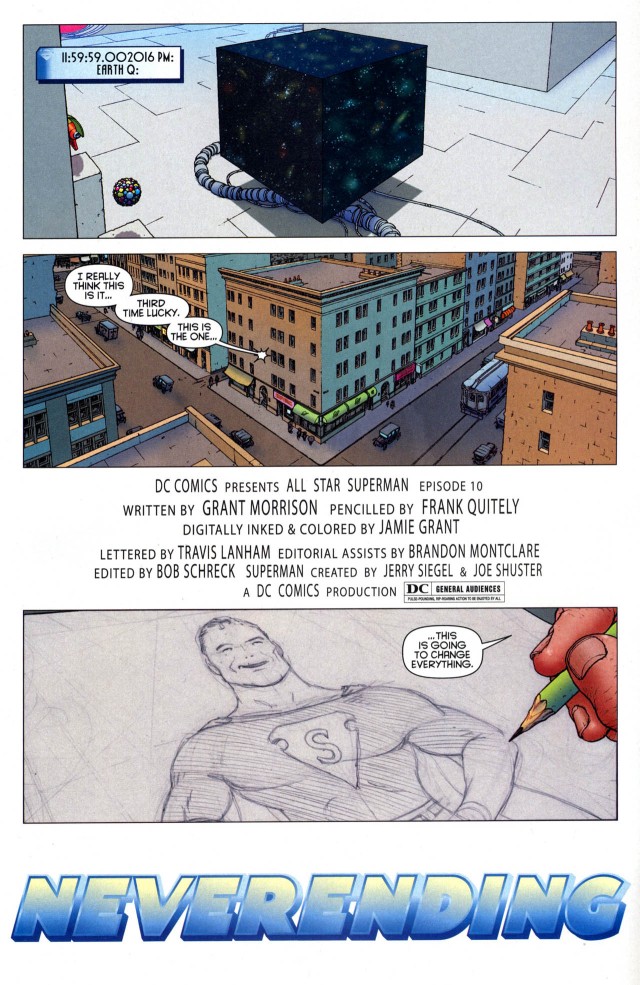 This is a far more nuanced idea of creator and creation than the one in Animal Man. At first sight, the hierarchies have been reversed – Siegel and Shuster’s universe, here, is the one inside the DC Universe. Except that this is absolutely the moment of creation of the DC Universe – the first ever drawing of Superman. And that creation is inspired by the influence of Superman from outside. This is more like a resonance between two universes than a straightforward hierarchy.

But it still seems to confirm Sandifer’s reading – Superman is, in All-Star Superman, pretty much goodness and decency personified, while we are fallen, helpless creatures who need raising up.

But why did we fall? For that we must look to JLA: Classified.

That’s the infant universe all grown up, as Ne-Bul-Oh The Huntsman. The seed of evil he’s talking about there is an infiltration into our universe from the DC Universe by a supervillain. I’ve argued at ludicrous length (40,000 words of it!) that when Ne-Bul-Oh refers to ‘fruit’ here, there’s a deliberate reference to the tree in the Garden of Eden. The DC Universe, in other words, is responsible for original sin.

And time and again in Morrison’s recent work, we see this – the two universes influencing each other, both for good and evil. Ne-Bul-Oh is evil, but only because of the DC Universe – but the people of the DC Universe enter our universe in order to prevent this. When the people of our universe look for inspiration, for heroes, we turn to Superman and Batman (Morrison has admitted that when he was writing JLA in the 1990s, at a time his life was collapsing around him, he was doing it at least partly as a magical working – crying out to Superman and Batman to save him). But when Zatanna is suffering, what happens?

She reaches out to us, the readers. Reaches out even though this story is the one where our universe is inside theirs, and is responsible for the attacks she’s fighting.

I think a close reading of Morrison’s DC Universe work, then, shows that he thinks the DC Universe could have either a good or a pernicious influence on this one – could be great or could be sociopathic – just as this universe could have a similar influence on the DC Universe. The two can either help pull each other up or drag each other down, and it’s up to us, the readers and writers and artists – the individuals – to decide which it’s going to be.

I agree with Sandifer that if we were to look at the output of DC Comics at the moment, or really at any time since about 2003, it would appear sociopathic. Where I disagree is that I think Morrison knows that, and that he’s working consciously to change that.

(I expand on these themes a *LOT* more in two books – Sci-Ence! Justice Leak! (about Doctor Who, Grant Morrison, Alan Moore and the stupidity of ‘canon’, and An Incomprehensible Condition, a book on the themes in Seven Soldiers specifically. If you enjoyed this post, why not buy them from one of the links in the top right hand side of this page?)

19 Responses to On Sentient Universes, The Problem Of Evil, Grant Morrison, Doctor Who and other such stuff