Sorry for the lack of proper updates this week, but I’ve been ill. Scientific method, Cerebus, Beach Boys and the first chapter of my novel, all this weekend if possible.

If you were wondering if my low-pricing experiment was a success…: 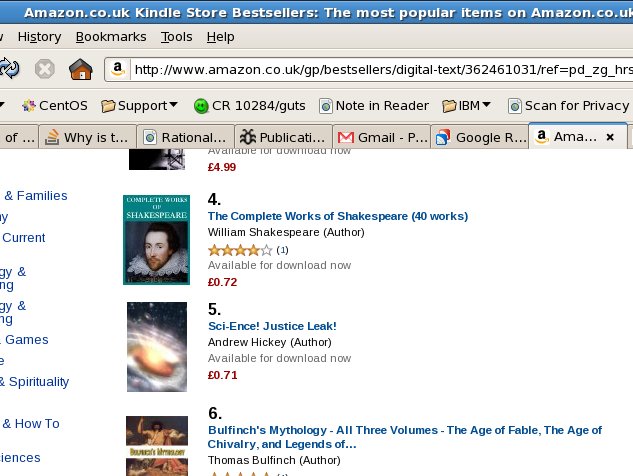 But I’m not (yet) selling enough more to justify keeping prices that low. We’ll see though.

Something else that’s low price at the moment is Toby Hadoke’s Moths Ate My Doctor Who Scarf, the download of which can be purchased for under two pounds.

Good Vibrations, the greatest single ever released, is 45 today. Here’s a Metafilter link to YouTube videos of various versions.

A simple explanation of quantum computing

A great list of stuff that – this week the Lib Dems have achieved in coalition. Marred by some sexist language, but still makes me happy. This week we’ve blocked the sale of the forests, stopped Housing Benefit cuts, got the AV referendum through, started the process of equalising gay marriage and got the Freedom Bill started.

An astoundingly good interview with Gerhard – parts one, two and three. This has made at least two people decide to take the plunge and read Cerebus.

Give to the Yes To Fairer Votes campaign

Michael Leddy links to five free Van Dyke Parks live MP3s, plus links to other performances from this tour.

This entry was posted in linkblogging. Bookmark the permalink.