A revised and improved version of this essay is in my book Sci-Ence! Justice Leak! – hardback, paperback, PDF Kindle (US), Kindle (UK), all other ebook formats

T. Rex feels like having a nice conversation about post-modernism.

This one’s going to be quite a short one, and more of a rant than a coherent statement.

Put simply, I am sick of comics reviewers referring to Grant Morrison’s work (and various others like him) as being post-modernist in some way. In a way, it’s an understandable claim – Morrison is clearly extremely influenced by Borges, Burroughs and other of the early postmodernists (at least in his early work, especially Doom Patrol). The problem is that in literature the term postmodern has a vastly different meaning – for God knows what reason – than it does in any of the other arts, and much as I don’t like comics aping cinema for popularity, nor do I like them aping literature for critical acceptance.

In most art-forms, postmodernism is a reaction to modernism – a re-appropriation of the styles and techniques of pre-modern art, but used with a more ironic, knowing attitude that comes from seeing the old styles in the light of modernist thought. Stravinsky’s neo-classical period, for example, where he retreated from his earlier advances and those of his contemporaries, was postmodernist music, as was, for example, Frank Zappa’s Cruising With Ruben And The Jets, which was an affectionate but knowing pastiche of doo-wop but using techniques far advanced from the original practicioners and with a subversive lyrical intent.

In literature, on the other hand, postmodernists have tended to be a direct continuation of modernist thought, rather than a reaction to it – Gravity’s Rainbow is very obviously the same kind of thing as Ulysses, rather than something set up in opposition to it, while Burroughs’ cut-up technique is a direct lift from Tzara’s How To Write A Dadaist Poem. In form and technique there is a direct continuation between modernist and postmodernist literature, whereas if you compare a postmodern composer like Philip Glass with a modernist like Edgard Varese, the two are practically working in different media.

And it is that technique – at least in Morrison’s early works (he hasn’t really used those techniques since The Invisibles, after which he stopped being so influenced by fiction writers and became more influenced by TV, video games and non-fiction, by his own account) which people are thinking of as post-modern. But things like The Brotherhood Of Dada, the Painting That Ate Paris, and the fictional world which becomes real (taken from Tlön, Uqbar, Orbis Tertius by Borges) are all at least as much modernist as postmodernist concepts, while his breaking of the fourth wall and acknowledgement of the work as fiction within the work itself are both things that Brecht played with as often as any postmodernist.

The reason literary postmodernists are lumped with the postmodernists in other arts, rather than with the modernists – their one distinguishing attribute – is that they share the postmodernist worldview. Essentially, postmodernism is a reaction to enlightenment values, claiming that rationality and human progress were illusions, and that they led to the atrocities that made up most of mid-twentieth-century history. While accepting the modernist critique of earlier eras’ irrationality, they claimed, implicitly or explicitly, that the notions of rationality and human perfectibility within a scientific worldview led to Hitler and Stalin (both of whose governments had portrayed themselves as modern and scientific, even as both had a visceral distaste for ‘decadent’ modernist art, and indeed for real science).

Having rejected both God and Man, that left only absurdism – the idea that not only does the world have no meaning, but we cannot even impose one on it, that the only reaction that is possible is to play with symbols, and that nothing will ever get better. (It’s hardly surprising that so many postmodernist writers either committed suicide or effectively killed themselves with addictions – if you’ve given up on the very idea of hope, it seems like a reasonable strategy. It’s a worldview that can lead to great art – much of the ‘serious’ fiction I’ve enjoyed has been by American postmodern writers like Vonnegut, Koszinski, Pynchon and so on – but which is not especially conducive to good mental health).

Now that, of course, is not an attitude Morrison shares – Morrison’s attitude is far closer to that of Nietzsche, that humanity is a bridge between the ape and the superman. A lot of the reason Morrison does so much superhero work is that he considers superheroes to be characters intended as signposts along the way to humanity’s destiny. He *believes* in perfectibility, in the future, in the innate good of humanity, and in all those things which the postmodernists denied.

He’s a modernist – practically the only one in comics.

Geoff Johns, on the other hand, is a post-modernist. Not in the literary way – he’s not at all interested in form – but in attitude. Johns is, in every way, trying to recreate what he sees as a ‘classic’ period of American comics (roughly, those produced by Marv Wolfman and Roy Thomas ca. 1982, a time which most other people consider one of the most artistically empty of all comics ‘eras’), but he is writing after Watchmen and The Dark Knight Returns made it impossible to write an innocent superhero story like those – every superhero story since then has had to take their influence into account, even if, like Johns, one is in reaction to it.

Johns is also determinedly anti-rational – scientists in his work are almost universally cast in the ‘meddling with things man was not meant to know’ mould rather than being seekers of knowledge, while many of his stories are based on the ‘logic’ of emotion rather than rationality. He also has a fascination with the surface elements of things – characters are used neither as characters, nor as representatives of ideas, but as toys to play with.

This can be seen in all his work, but the most obvious example is the appearance of Mongul in Infinite Crisis. The character appears in issue 1, does some bad stuff, and then disappears from the story altogether (as far as I can remember, I’ve not read the wretched thing since it came out). The only reason – the only reason – the character appeared was so Johns could have this panel: 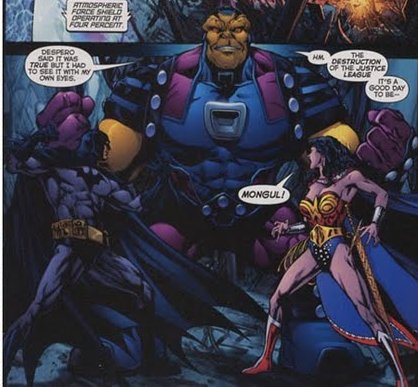 Panel from a bad comic

Which in turn he only wanted to include as a reference to this panel: 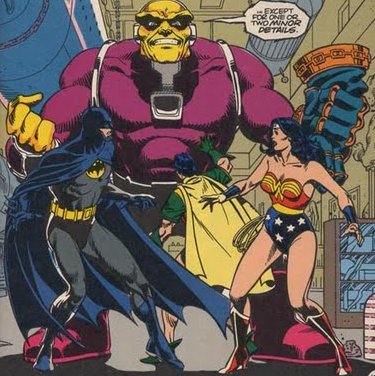 Panel from a very good comic

Not to refer to anything about the panel – which in the original story had a purpose, a reason for being there as part of a coherent narrative – but just to say “look, here’s this thing – do you remember it from another comic? So do I!” Were Johns’ comics not so often so joyless (with rare exceptions like Booster Gold and Up, Up And Away!) they would be ludic – playing with the characters as if they were action figures, making them act out all his favourite bits from all his favourite comics, and not bothering with any kind of meaning to their actions.

The denial of the idea of progress runs very deep in Johns as well (though one suspects for essentially Conservative reasons, rather than the postmodern horror at the Holocaust, the bombing of Dresden and so on). He’s determined to return the status of all the characters in the DC Universe to their early-80s versions, even if this means killing off half of them while returning the other half from the dead. Which of course also robs the concepts of life and death within his stories of meaning quite as efficiently as Vonnegut’s distancing effects do.

So by any reasonable metric, Morrison is a modernist while Johns is a postmodernist.

Of course, I still wonder if it would be possible to have a *good* postmodern superhero comic. I don’t see why it wouldn’t – in fact, Hypertime, if used properly, could be a tool to do just that…