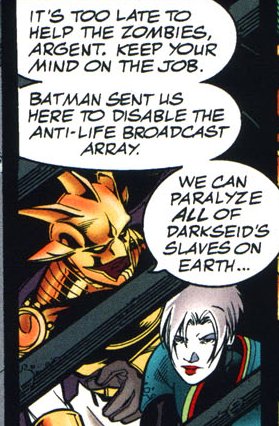 From Rock Of Ages by Grant Morrison and Howard Porter

The Zombies’ album Odessey And Oracle is one of the few ‘classic albums’ that happens to really be the best album of the band’s career. While many Beach Boys albums are at least as good as Pet Sounds, Revolver beats Sgt Pepper hands down, and Da Capo is half a better album than Forever Changes, The Zombies’ career was short enough that they only really made one proper album-as-statement, so it’s lucky that Odessey And Oracle, which was released in 1968, after they split, is as good as anything out there.

A few years back, two of the members of the Zombies, Colin Blunstone (the lead vocalist) and Rod Argent (the main instrumentalist – a wonderful keyboard player, who also wrote the band’s biggest hits) started touring together, firstly as “Rod Argent and Colin Blunstone of The Zombies”, but then the “Rod Argent and Colin Blunstone” started getting smaller on the posters and The Zombies getting bigger, and now their touring band just tours as The Zombies. I never managed to see them live, even though the Zombies were one of my favourite 60s bands, because there has always been some kind of scheduling conflict (for example when they played Liverpool in 2004, Brian Wilson was performing Smile in town on the same night), but the live recordings I’d heard of the touring band had been pretty good (though reunion album Out Of The Shadows was fairly poor, with only the decent Ray Charles-esque blues track Mystified being at all memorable, and even that badly produced).

However, last year the four surviving members of the Zombies (guitarist Paul Atkinson having sadly died a few years ago) got together for a handful of concerts in That London to celebrate the fortieth anniversary of Odessey & Oracle. In the first half of the shows, Blunstone & Argent’s touring Zombies played a normal set, while in the second half the four surviving members, augmented by touring guitarist Keith Airey and keyboardist Darian Sahanaja (who regular readers will have heard me rave about before) performed O&O from beginning to end. (A live album from those concerts can be heard here for those of you with Spotify, but the live DVD that came out this week is better, having more songs). After this, they announced that they would be playing four (and only four) UK gigs doing the same thing, and then never play the album live again. As one of those was the Bridgewater Hall in Manchester, I had to go, along with my 22-year-old brother who is only now starting to develop his musical taste.

The first half of the gig, by the current touring ‘Zombies’, was a mixed bag. The band themselves are the same kind of lineup you see when going to see any 60s group live these days – two original members (you’ll recognise these in any 60s group – they’re the ones with the mullets), a bass-player who used to be in a different 60s group (Jim Rodford, formerly of Rod Argent’s late-60s band Argent, and a member of The Kinks for 20 years), a guitarist who looks like he thinks he’s too good for this and insists on playing twiddly blues riffs all over everything (Keith Airey, who my brother said was ‘working out his mid-life crisis live on stage’, and looks like a clone of Roger Daltrey) and someone several decades younger than anyone else on stage who’s the son of one of the other members (drummer Steve Rodford).

Starting out with I Love You, the band stormed through the first half of the set. The early Zombies songs worked very well – the appeal of the Zombies early on was Blunstone’s voice and Argent’s keyboard, anyway, so the others weren’t too missed. Those early songs, while good of their type, were pretty much indistinguishable from other chart music of the time in their construction – most of their first few singles could have easily been hits for the Swinging Blue Jeans or The Merseybeats – but Blunstone’s breathy, gorgeous jazz-inflected vocals and Argent’s Hammond organ made the finished records sound like Mose Allison Goes Merseybeat.

Surprisingly, though, while the first set contained a few early Zombies songs, and one or two from the reunion albums, as well as songs like Sticks And Stones (a Ray Charles cover the Zombies used to do), a big chunk of the first set was devoted to Colin Blunstone’s solo records.

This is no bad thing. After the Zombies split, Argent formed the imaginatively-named prog band Argent, along with (as a non-performing writing/production partner) Zombies bassist Chris White, but Blunstone went on to make a couple of exceptional solo albums – One Year and Ennismore – before his later, more mediocre, solo work. One Year was produced by Argent and White, and so is effectively a Zombies album by any other name, and may even be the best of them.

Unfortunately, One Year was based around some gorgeous string arrangements which couldn’t be replicated live, but the Tim Hardin cover Misty Roses still worked wonderfully with just Blunstone’s vocal and Airey’s (remarkably restrained) acoustic guitar. Say You Don’t Mind worked less well, turned into a Status Quo-esque boogie (they said later that the Zombies used to play it that way live, but that didn’t make it any better). I Don’t Believe In Miracles, on the other hand, from Ennismore, is one of those songs it’s impossible to mess up, though it helps that Blunstone still has one of the most extraordinary voices in popular music.

Unfortunately, the sound in this first half was *appaling*, and the fault must be that of the sound engineer as the Bridgewater Hall has the best acoustics of any venue I’ve ever attended. Blunstone’s voice was almost drowned out for much of this first half, and the whole thing was a wash of reverb. The band played wonderfully, and Blunstone in particular sounded stunning – but it was a strain to hear him. I should have realised the sound engineer would be bad even before the start of the gig – the intro CD was an Otis Redding mono/stereo twofer, and when it turned into stereo, we could only hear one channel through the PA, so we were treated to minimalist bass-and-horns-only versions of Mr Pitiful, Satisfaction and so on…

However, despite this, the first half was very good, and the ‘new’ members acquitted themselves pretty well. The first set ended with Argent’s hit single Hold Your Head Up, which sounded far better (though still not all that great) with Blunstone singing lead.

The second half was what everyone had come to see, though. The Zombies had split up before Odessey And Oracle had ever been released, and so they’d never performed this material live. In fact Hugh Grundy, the drummer, and Chris White, the bass player, have not played live much at all in the forty-plus years since recording the album. But here were four of the original Zombies, plus Keith Airey on guitar, Darian Sahanaja on keyboards, the Rodfords on backing vocals and hand percussion and Chris White’s wife Vivienne Boucherat on backing vocals.

I was particularly glad to see Chris White on stage, as while Rod Argent wrote the band’s biggest hits, and some very very fine songs like A Rose For Emily, Chris White wrote seven of the thirteen songs on Odessey And Oracle, and I always found his songs to be more to my taste than Argent’s – songs like This Will Be Our Year and Friends Of Mine seem slightly less calculated than Argent’s rather intellectual, precise writing.

But actually one of the striking things about Odessey And Oracle is how unified Argent and White’s vision was. Normally if you have two non-collaborating songwriters in a band you end up with two very different styles – think of Lennon & McCartney, both equally good, but McCartney could never have written I Am The Walrus and Lennon wouldn’t have written For No One. By contrast, White and Argent have almost interchangeable styles – White slightly more folky and Argent more jazzy, but Argent could easily have written Butcher’s Tale or White I Want Her She Wants Me.

What’s even more amazing is how well the album stands up as a live performance. Usually, when watching one of these ‘classic acts perform their classic albums’ shows, there are one or two songs that just don’t work in a live setting – watching Brian Wilson do Pet Sounds live, for example, Don’t Talk (Put Your Head On My Shoulder) never really came off very well, even though on the record it’s by far the best song. By contrast, it was relatively weaker songs from Odessey And Oracle like Changes (only relatively weaker – O&O is almost unique as a filler-free album) that shone here – hearing those block harmonies (and the vocal blend was stunning, with Blunstone, Argent and White sounding just like they always did, and the other members only adding background touches that had been tracked in the studio) sent shivers down my spine.

Thankfully, the sound engineer had sorted the balance out for the second half, and every note was audible, and Airey had toned down his guitar histrionics, playing note-for-note the parts on the record. Blunstone was in stunning voice throughout – and he’s the only one of the great sixties vocalists whose voice hasn’t aged at all – and everything from the opening of Care Of Cell 44 through to the end of Time Of The Season was about as perfect as you can imagine. The record was replicated absolutely faithfully, but Blunstone’s vocals were if anything even better – I was open-mouthed in awe at his singing on the “she told me to be careful if I loved her” section of I Want Her She Wants Me, and every single song in the second half was just beautifully done, from the a capella folky chanting of Changes to the pastoral psych of Beechwood Park (the “Oh roads in my mind” section being another stunner) to the jazzy pop of Time Of The Season.

After this, there was an ‘encore’ which didn’t involve anyone leaving the stage, consisting of their two big hits, She’s Not There and Tell Her No, plus Going Out Of My Head, all augmented by the brass section who’d come along to play on This Will Be Our Year, and then a final real encore where they performed the Gershwins’ Summertime, the first song they ever recorded.

It was definitely a show of two halves, and I feel very sorry for everyone who didn’t get to see this (they say they’re never going to do this in the UK again, though I think they’re touring the US doing it) but I’d definitely still recommend going and seeing the touring band if you get the chance – the ‘new’ members aren’t the originals, but they’re good at what they do, and their half of the set was marred by factors out of their control. But this was one of the handful of shows (like seeing Brian Wilson premiere That Lucky Old Sun, or Richard Thompson doing 1000 Years Of Popular Music, or Pulp at Glastonbury in 1995) that will remain with me forever. My brother, who didn’t know the band’s music at all before going to the gig, came straight out and bought a copy of the live DVD of last year’s show, which should tell you something about the quality of the show.

Like Loading...
This entry was posted in music and tagged colin blunstone, Darian Sahanaja, music, rod argent, spotify, the zombies. Bookmark the permalink.